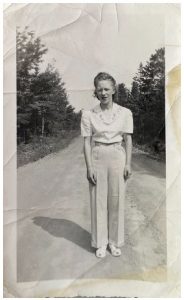 Betty Stringfellow Hudson was born in England on March 17th, 1926. By the time she was in her early teens WWII was raging in mainland Europe. England was being bombarded by the German Luftwaffe. Air raids began on Manchester in September of 1940. Betty has told of resting in her bed, hearing the bombs exploding all around her home. The next day whole streets and city blocks had been destroyed.

Betty was an only child born into a working-class family. Her grandfather, Herbert Stringfellow provided the main support for the family. He worked in the textile industry for which pre-war Manchester was known. Because the city was producing munitions and vital airplane parts it became a primary target for nightly raids.

Betty enlisted in the “Auxiliary Territorial Service” June 9, 1942 and served until December 20, 1945. During her time in the service, she met a young Canadian, Roy Hudson, who was recuperating from wounds received while fighting in Italy.

Roy and his twin brother Edwin enlisted in Moncton, New Brunswick, Canada in March of 1943. After a few weeks of training, they shipped out for England as part of the Carlton and York Regiment. They were both wounded in Italy only two days apart, but in different locations. They had three half-brothers who were also serving overseas. One cannot imagine a mother’s constant worry with five sons, any or all, in mortal danger at any given time. During that time the only communications were handwritten letters, which could take weeks to receive a response. There were no evening news reels showing what was happening overseas and the daily newspaper had delayed news. He and his brothers all survived and returned home to the family farm, two miles outside the small town of Rexton, New Brunswick. 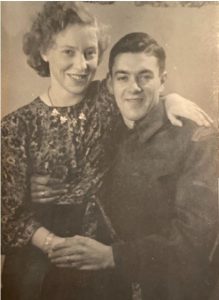 It is not known exactly where or when Betty and Roy met, but we do know they were married September 21, 1945. Roy would return to Canada with his army regiment and Betty would follow as one of approximately 48,000 war brides who came to Canada. She arrived on the Queen Mary at Pier 21, Halifax, Nova Scotia, on June 15th, 1946. There is a lot of documentation about WWII war brides. Many came from homes in large cities surrounded by family and friends and found themselves having to adapt to very different living conditions. This was true for Betty who would have to adapt as well.

The summers in New Brunswick are beautiful, but winters are frigid. It would be many years after Betty’s arrival before electricity, modern plumbing and phone service would reach the farm. While some war brides received a warm welcome, Betty was not received with open arms. It was an adjustment for all concerned. The Hudson family farm was about 50 acres in size, but most of it was timber which provided some income. The family basically lived off the land, grew their own vegetables, raised pigs, and chickens. Some years they grew enough potatoes to sell at market. Potatoes were a main staple of their diet.

The first several years after the war were a struggle for the young family. Betty and Roy had four children by the year 1958. Besides working the farm, Roy sometimes worked for the highway department where he learned how to operate heavy road equipment. This would serve him well in later years. Their children from eldest to youngest: Janice Elaine (‘46), Patricia Ann (stillborn ‘48), Susan Marion (‘51), Melvin Roy (‘53), and David Keith (1958-2008). 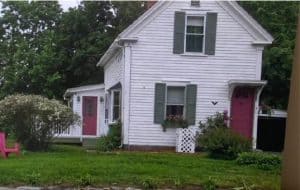 By the early 60’s, Betty and Roy had decided they must immigrate to the US to provide a future for their family. After a long process of costly paperwork, the family made their way to Westford, MA in May of 1962. Arriving in one vehicle with just some personal belongings, former neighbors helped them settle into an apartment on Flagg Rd, Westford. They eventually purchased a home at 2 River St, Graniteville in 1965.

You could say that Betty and Roy found the ‘great American dream.’ It 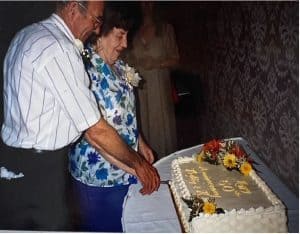 was a modest home, but they made it their castle. The yard was well maintained with an example of a typical English garden. Roy worked for a large corporation, maintaining the grounds, roadways, and parking lots until his retirement.

Their Finest Hour, by Winston Churchill. War Brides, published by the Department of National Defense, 1944