Our Museum Street Sign is history and needs to be restored! 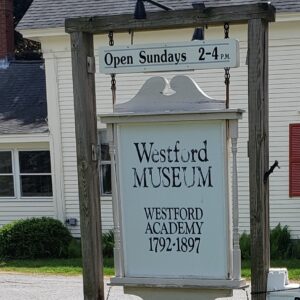 For over 30 years the Westford Museums’ outdoor sign has proudly hung by Boston Rd. The sign was donated to the historical society by Brad Emerson of Emerson Real Estate when he sold his business on Boston Rd and over time has become very worn and is now difficult to read. The sign is painted on tin and we would like to keep the artistic nature of the sign rather than using vinyl letters. Painting the sign is more expensive than a prefabricated sign but represents the nature of the museum in an appropriate way. You can help us and support a local artist as well in this effort.

We have approached a Westford local artist, Mary Jane Brunelle to restore it and we would like your aid in funding the project. Mary Jane estimates that it will take her no more than eight hours to restore both sides of the outdoor sign at her non-profit rate of $40 per hour. Please consider supporting the restoration of the museum’s outdoor sign by donating ½ hour of restoration work for $20

You can do this this by Sending  a check to the
Westford Historical Society,
P.O. Box 411, Westford MA 01886

Join us for a Walking Tour of Historic Graniteville
Saturday August 15, 2020 at 2pm
Meet at the United Methodist Church, 10 Church St. Westford MA 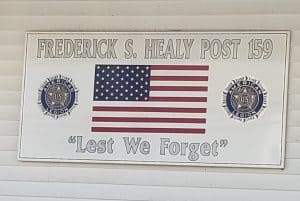 When World War II broke out, Healy who was over the age of forty was determined to be too old to be drafted into the armed forces.  But despite his age, Healy would not remain at home and rejoined the U.S. Army.  In 1942, he was again assigned to Europe to join the allied forces.  Freddy Healy was killed in France on September 27, 1944,   a little more than three months following the Normandy invasion.  He was the oldest Westford Academy graduate to serve in World War II.  Healy was awarded the Purple Heart posthumously on January 23, 1945. At the conclusion of World War II, the American Legion post in Graniteville was named in his honor and still carries his name today. (James VanBever, 2020)

The 19th Amendment to the U.S.Constitution granted American women the right to vote, a right known as women’s suffrage, and was ratified on August 18, 1920. We are going to recognize this historic event with a 1920 Victory Rally and Promenade on the Westford Common. 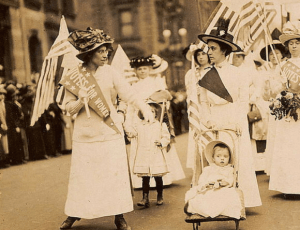 Come and celebrate the 100th anniversary of women’s right to vote. For the past year, the Westford Historical Society in partnership with the League of Women Voters of Westford and Westford Cultural Council has been recognizing the ratification of the 19th Amendment through our Westford Celebrates Women’s Right to Vote, public programming series and social media. We are hosting a 1920’s Women’s Suffrage Victory Rally and Promenade (Parade) around  the Westford Town Common with several prominent women speakers who have are making a difference in Westford‘s community life.

You are invited to wear white in commemoration of the 1920’s Women Suffrage Victory Rallies and encouraged to make “Right to Vote” sashes, signs and posters for the promenade. Face mask required

This is not the first women’s suffrage valley on the Westford common. From the Westford Wardsman, August 21, 1915:  An open-air meeting was held in the interest of equal suffrage on Wednesday evening at Westford common.  The speakers were Teresa A. Crowley and Gertrude Halladay Leonard, both good speakers, who presented their cause to a good number of listeners

Gertrude Halladay Leonard  became interested in the suffrage cause in 1905 and for the next 12 years gave an increasing amount of time to the suffrage movement in Massachusetts. From 1912-1917 she was chairman of the State Board of Directors of the Massachusetts Woman Suffrage Association (MWSA) and was virtually acting president, as Alice Stone Blackwell was often unable to fulfill her duties in that office. She served as chairman of the first Boston Suffrage Parade. Along with Theresa Crowley, Mrs. Leonard was greatly responsible for the work of lobbying in the state legislature in favor of a suffrage bill. When the U.S. entered WWI in 1917, Leonard resigned her chairmanship in order to spend the next few months in France as a Red Cross volunteer. From 1925-1926 she worked as an organizer for the League of Nations Non-Partisan Association.

As an Irish Catholic, Teresa Crowley (b. 1874, Wakefield, MA, d. 1930) was unusual among her peers in the National American Women’s Association, most of whom were upper middle class Protestants. She was a lawyer, amateur actress and suffragist. As chairman of the Legislative Committee of the Massachusetts Woman Suffrage Association, she led several successful campaigns against anti-suffrage politicians and is remembered as one of the leading orators of the suffrage movement.” 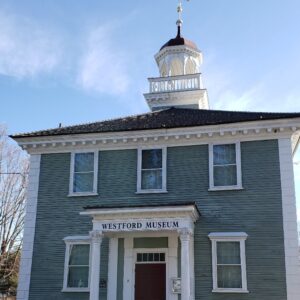 Winner of the July Capture the Moment Photo Contest.

Check out the great pictures that have been submitted to our July photo contest. Do you like taking pictures? Submit your Westford related pictures to our COVID-19 Digital Time Capsule, Capture the Moment Photo contest by August 15th.