From the Military Exhibit 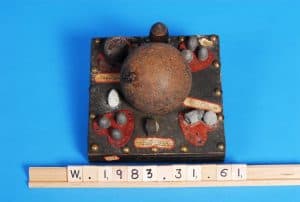 As is the case with many objects donated by Westford’s Fletcher Library, it is often the library itself that provides the Westford context. Its maker is not listed, and information comes from the display itself. The display has ammunition from multiple wars. Center: 6ib cannon ball from the Revolutionary War. Top left: grapeshot dug up in a yard in Charlsetown, MA. Lower Left: 1825 bullets. Lower Center: shot and wadding that come out of Daniel Boone’s gun from 1810. Lower Right: cartridge and bullets from he War of 1812. Top Right: 1825 bullets. Center: shell thrown from a British ship and found embedded in an old wharf at the foot of Copps Hill, having laid there since the British left Boston until uncovered by contractors of City Improvements.